Perimenopause and medical sexism: Your symptoms are real, you are not alone, and you deserve thoughtful treatment 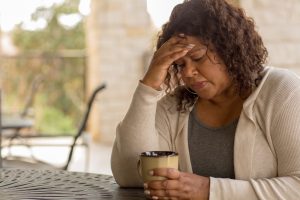 Too many women are suffering alone through one of the most difficult periods of their lives in their mid-40s to mid-50s when they go through perimenopause. Some go through early menopause or surgical menopause. No one talks to us about the sometimes severe and debilitating symptoms that can occur, lasting for years. Medical doctors dismiss their struggling female patients, shrugging their shoulders and saying, “You’re just aging.” Functional medicine and alternative medicine doctors, the vast majority of whom are male, can be just as belittling and dismissive, passing off your symptoms as a personal failure and hormone replacement therapy (HRT) as a cop out for loser sissies.

I have been reading many different women’s stories online about their perimenopausal journeys and the most alarming and distressing pattern is how they are ignored, dismissed, gaslighted, and patronized by their health care practitioners. Some of these women’s symptoms are so severe they are legitimately considering suicide.

Here are some of the symptoms that can strike, and that are ignored or misdiagnosed as a need to lose weight, exercise more, and take an antidepressant:

The only thing that can work on the symptoms of a significant estrogen deficiency is estrogen. The other thing online forum users report is an almost complete reversal of symptoms when they begin HRT.

The smear campaign began when a large, grossly flawed study found that HRT raised the risk of cancer and chronic disease; the findings were later debunked but the stigma persists. Doctors pulled their patients off HRT cold turkey, sending many into an abyss of disability and debilitation. We will never know the full extent of how many women were affected and to what degree. It is every women’s personal choice regarding cancer risks as findings are mixed, but some women say they simply have to function while they are still alive and it’s a necessary risk.

Do we shame women who need thyroid hormone? No. Do we shame diabetics who need insulin to stay alive? Ok yes, we culturally shame type 2 diabetics (at least in the alt health space), but no doctor is going to deny a diabetic life-saving insulin (although insurance companies may make it financially inaccessible).

Yet untold numbers of women are set adrift with perimenopausal symptoms that can be so severe they have to quit their jobs, can no longer care for their children, and are considering suicide as their only option. Doctors don’t take women’s symptoms seriously—even female doctors—because of the sexism inherent in medicine. This isn’t me mouthing off, medical sexism is a well known and well researched phenomenon. This sexism extends to practitioners in the alternative health space and to other female-focused conditions, such as autoimmunity, endometriosis, and chronic pain. And if you’re a woman AND a person of color, you’ve got an even bigger hill to climb.

Ideally, the adrenal glands take over hormone production as the ovaries wind down. However, we live in an environment of more than 100,000 environmental toxins, many of which have been shown to harm the endocrine system. We live in a society founded on chronic stress, which beats your adrenal and endocrine systems into the ground by midlife. Many of us are survivors of sexual violence, often starting in early childhood, eating disorders, domestic abuse, workplace discrimination, daily sexual harassment out in the world, having to work full time and handle most of the house hold and child rearing duties, and other traumas that exhaust the body. (Did I mention pregnancy, nursing, and years of sleepless nights with infants and children?)

In other words, needing HRT is not something to be ashamed of. Your body has carried you through all those years the best it could and now it’s tired and needs some support.

If you go to a doctor, go in educated and prepared, and understand it may take a few doctors until one takes you seriously. I suggest calling a compounding pharmacy (they make bioidentical hormones) and asking for recommendations of doctors in your area that they work with.

If you work with an MD, look online for those who specialize in HRT. Don’t expect some rando gyno to be on your side.

If you are uninsured, underinsured, or cash strapped, you may be surprised to learn that many women are self-treating with bioidentical hormones they order off amazon or other sources. Doses will be less concentrated, but you can read online reviews to see how other women are doing it.

Books and video resources I have seen recommended include Estrogen Matters, Outliving your Ovaries, and Menopause Taylor’s YouTube videos.

As with most issues related to women’s health, you must take control, educate yourself, and go into a doctor’s office armed with more knowledge and information than they will likely have. Do not let them gaslight you, ignore you, or condescend to you. There is nothing a doctor hates more than a patient who knows more than they do on a particular topic. But they operate largely as pharmaceutical dispensaries and are not trained in these things unless they make it a focus of their career.

You are not alone, your symptoms are absolutely real, you have shit to do and need to function, and you deserve an ally who will support you through perimenopause, an autoimmune condition, or any other health condition that does not fit into a tidy male box.

Don’t put up with anything less, you’re worth it.