My trainer made me cry: Autoimmunity and exercise – what trainers need to know 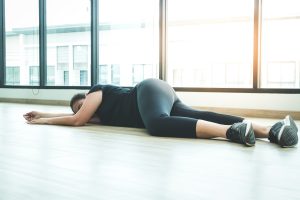 After my knee injury and surgery I put myself in a physical therapy type strengthening program. The emphasis is on exercising safely and building muscles around the joints to support their stability and integrity. Not cheap, but the program appealed to my need for caution around not only my fresh injury but also my autoimmune condition. I had crashed too many times already from over exercise by this point in life, and learned to err on the side of caution, especially while also now battling a tenacious mold illness.

Exercise is great for autoimmunity and other chronic health conditions. It activates a wide variety of neurochemical responses that dampen inflammation, balance the endocrine system, boost brain function, and make you feel happier. IF you don’t overdo it.

If you are dealing with autoimmunity, mold toxicity, or other chronic health conditions, too much exercise spikes inflammation and flushes your mitochondria — your cellular energy factories — down the toilet. This means you have difficulty recovering and a vigorous session can pin you to bed for a few days…or weeks.

How much exercise is too much? That totally depends on the fitness level of the individual and the amount of inflammation they are dealing with at that time. One week you can be crushing it on the trails or at the gym, and the next you can barely check the mail because you were exposed to one of your triggers.

When I began the program I explained this to my trainer, fully expecting it to land on deaf ears and glazed-over eyes. Those of us with chronic health issues become accustomed to being viewed as whiny, complaining, lazy, weak-willed, etc. Heck, our own doctors — or spouses — are usually the worst offenders.

For a while things were fine, and I kept up with my sessions, even during a particularly long and arduous move that included a flight of stairs. Soon, however, I started to tank. Old injuries were flaring up. I was having trouble recovering. I wasn’t sleeping well and I was eating crap restaurant food while living without a kitchen, which was worsening the inflammation.

So I told her all of this as matter-of-factly as possible, and that while I would keep showing up, I would need to dial back the intensity. I felt that familiar coil of shame tighten in my gut.

But then something new and unexpected happened. She got it. She totally understood. She told me that when she was in college her roommate and best friend had fibromyalgia and struggled with this. Once when they went rock climbing together, her friend was confined to bed for almost two weeks recovering. Travel made her crash too. And she didn’t want that to happen to me. So she adjusted my session to still activate my muscles and get my blood pumping (by doing much longer reps at lower weights), but all within a very reasonable window of effort and with constant feedback from me.

When I got in the car after my session, tears started rolling down my face. I felt that tightness inside me unwind, and I realized such a big factor with a chronic health struggle is the heavy shield we must always carry against the stigma, the shame, and the embarrassment of looking like perennial under achievers.

Whoever that young college woman with fibromyalgia was, I had her to thank that afternoon. With autoimmune rates continuing to rise, we need more people in the fitness industry like my trainer, who understand the mechanisms of autoimmunity that many of their clients are dealing with today.