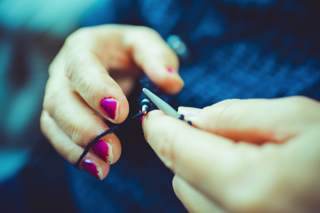 If you’re like most people today, you spend hours a day in front of a screen. Americans now spend at least half their lives in front of a screen, five times as long compared to 50 years ago. This excessive screen time has been linked with neurodevelopmental issues in children and “digital dementia” in adults, not to mention depression, isolation, sleep disorders, and anxiety.

While the answer is to spend less time using screens, the problem is screen time also appears to be uniquely addictive for us all.

Is there an antidote? Studies show spending time working with your hands crafting, building, gardening, etc. can provide unique qualities that boost your physical and neurological health. If you’re working to manage a chronic condition such as autoimmune disease of gastrointestinal disease, regular craft time can be a fun and beneficial tool in your health toolbox.

For instance, knitting, crocheting, sewing, and other textile crafts have been shown to have the same neurological benefits as meditation and mindfulness.

Regular knitters have reported knitting makes them feel happy and they are drawn to the craft for its stress relief and anti-anxiety effects. People who knit three or more times a week reported more benefit than those who knitted less frequently.

What’s more, people who knitted in a group or did some other type of group craft activity were even happier than those who knitted solo, thanks to the proven health benefits of socialization.

About three quarters of patients with anorexia nervosa reported knitting distracted them from obsessive, ruminating thoughts about food and weight and helped them feel more relaxed.

Oncology nurses reported knitting reduced compassion fatigue and stress in one study, and another found people with chronic fatigue, depression, and other chronic health disorders experienced increased positivity and well being engaging in textile crafts.

While these crafts are associated primarily with women, research has also found traditionally male crafts, such as woodworking, repair jobs, and “tinkering” impart the same benefits.

The benefits of crafting are believed to be derived from the “flow state” of repetitive mindful action crafts require.

Working with your hands is good for the brain

Although crafting delivers psychological benefits that translate into biochemical mood boosts, there is another important aspect of crafting — working with your hands is great for the brain.

In an era when many of us use our hands primarily for texting, typing, and swiping, handiwork and crafting can activate long dormant areas of the brain. And healthy brain activity in one area, such as the “hands” area, will help improve activity throughout the rest of the brain, contributing to overall improved brain health.

Working with your hands on something physical boosts reward circuits in the brain in ways working abstractly only with your brain doesn’t. This in turn triggers a cascade of neurochemical reactions that improve motivation and self-esteem and relieve depression.

The repetition, memory, and learning required when engaging in a task keeps the brain engaged in a mindful manner while freeing up the “thinking” centers of the brain that are engaged for knowledge tasks. This is not only calming and therapeutic for anxiety and obsessive thoughts, but many people report that this cognitive brain break allows problem solving and creative solutions to spontaneously arrive while crafting.

Knitting, woodworking, scrapbooking, and other crafts may seem like an odd recovery tool when you’re working to manage autoimmunity, gastrointestinal disease, or other chronic health disorders, but once you understand their physical and mental benefits, it makes perfect sense to ditch the screen for some handiwork on a frequent basis.